A downloadable game for Windows, macOS, and Linux

Highway Duty is our submission to Weekly Game Jam #96

It's a clicker game where you have to allow cars to pass through the barriers by clicking them. Make money for each car that passes through your roads to keep your company alive and don't forget to pay your taxes!

Man, I love the low poly style that you used here. Everything looks so clean! Really like the concept. I especially like how you solved the problem of having too many lanes by introducing the automation. The automation basically makes it so you only need to view a few lanes at once.

The automation thing does sort of take it from a clicker game to more of an idle game, though.

It took me a second to realize what I was doing -- I bought a bunch of stuff before I even realized I had to click the toll barrier.

I feel like paying taxes becomes irrelevant very quickly -- you can pretty much just leave the auto pay on. That does run the risk of not paying your taxes if you don't have enough money, but the amount is so low that you can get it pretty quickly.

A bug: If you restart the game, you restart with the same amount of money you had when you quit, but you lose all of the lanes and upgrades. Due to this I wasn't able to see what happens when you don't pay your taxes.

Hey! Thanks for the feedback :) Glad you liked the art!

We didn't want tax payment to become an annoying thing you'd have to do evey 60 seconds, or something you'd lose to if you forget to click the pay button. As you said, since the game moves from a clicker to an idle game having a way to pay the taxes automatically whenever you can, seemed appropiate.

The game keeps your money because we were planning on having a save feature (so if you restart the game you could keep playing from where you left it) but we ran out of time for the jam and only saved the cash ^^. So it just gives you a head start for your next game for now 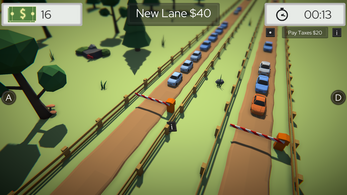